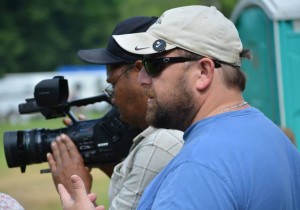 After spending over 15 years in the computer technology field, John knew there had to be something else out there for him – a new career that could reignite the passion he had once felt for computers. He had always been interested in radio, so, after a layoff in 2007, he decided to attend the Connecticut School of Broadcasting in Hasbrouck Heights, NJ to see if he had what it took to be a radio personality. The school’s curriculum required John to take classes in all aspects of broadcasting, both in front of the camera and microphone and behind the scenes. He learned about mixing boards, editing, and recording, but really fell in love with being behind the camera. His teachers saw he had an eye for creating “the shot” and encouraged him to develop his skills as a camera operator. He quickly gained experience with a variety of projects, purchased his own cameras, and continues to learn all he can from the professionals he works with on every assignment. Now John earns Director of Photography credits, as well as Producing and Directing original videos and creating his own projects.

Music Video: “Do You Like me Now”, Joyce Laogoan – Director of Photography

Documentary: “50 Greatest Gospel Acts of All Time” – Director of Photography

Feature Film: “The One” – 2nd Team Camera and Equipment Manager